Miyagi Prefecture is located about three hundred kilometers northeast of Tokyo and is part of the Tohoku region. There are a number of ways to get to and around Miyagi. Let us introduce you to some of the major routes below. 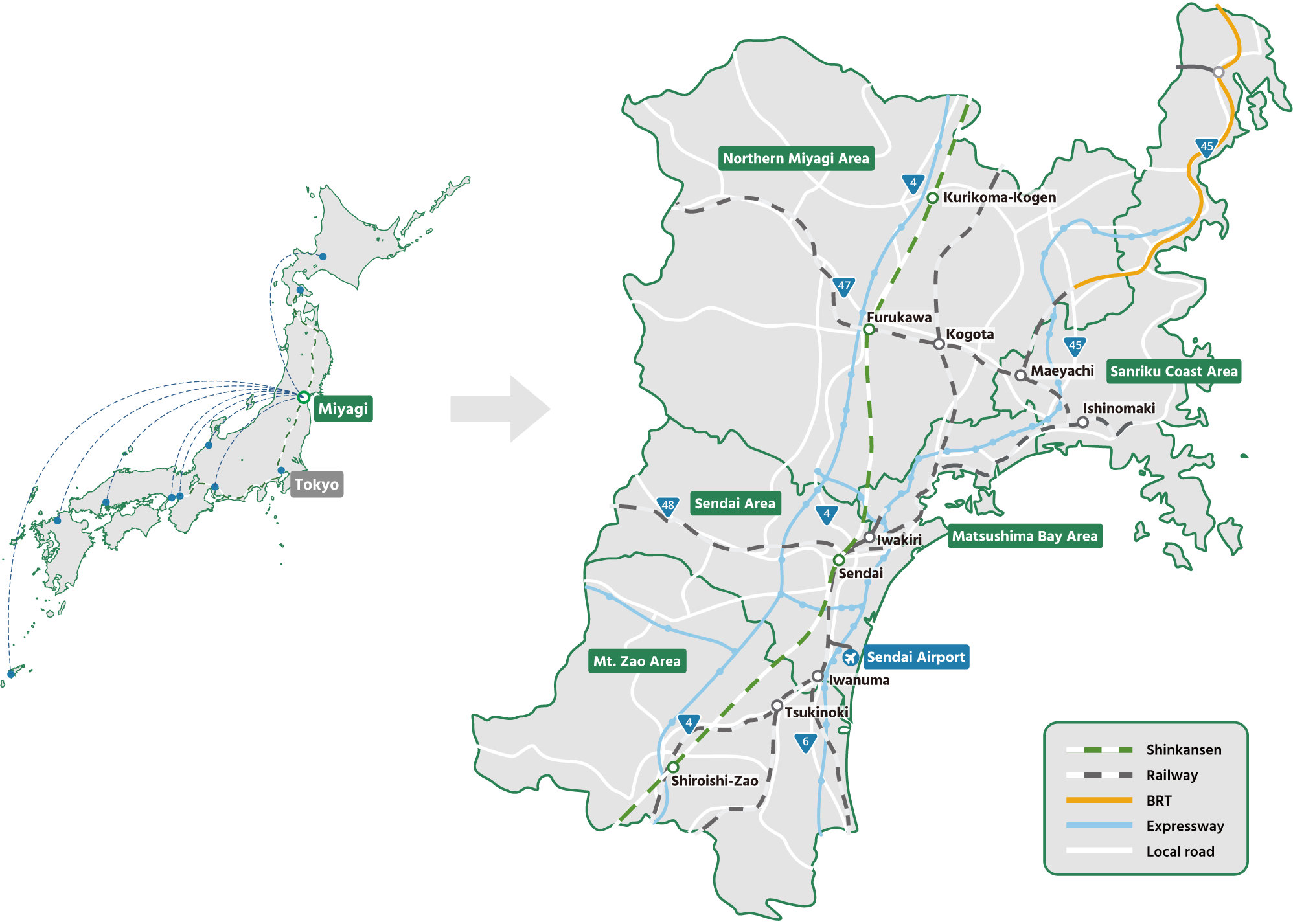 3 main routes provide access to Miyagi: by bus/car, by air, and by shinkansen (bullet train).

The Tohoku Expressway (a toll road) runs north-south through Miyagi Prefecture, and is the main road used to access Miyagi. There are numerous highway bus connections between Miyagi and other cities of Japan, including Tokyo.

The airport has international flights connecting Sendai with Seoul, Shanghai, and Taipei. Domestic flights fly direct to major cities of Japan. If you fly in to Sendai Airport, you can get to downtown Sendai directly via the Sendai Airport Access Line train. The airport also offers direct bus service to Matsushima, Hiraizumi, Akiu Onsen, and other sightseeing destinations.

The Tohoku Shinkansen (bullet train) transports passengers from Tokyo to Sendai in about 1.5 hours. Shinkansen trains are a quick, easy way to get to Miyagi from other prefectures, including Hokkaido, Aomori, Iwate, Akita, and Fukushima.

Major means of getting around Miyagi are train, subway, bus, and car

JR East Pass: a special discounted pass available only to customers visiting Japan (with a short-term visa no longer than 90 days) and holding a non-Japanese passport, which allows unlimited rides on all JR East train lines in the JR EAST PASS (Tohoku area) designated area. This includes travel from Narita and Haneda Airport, the shinkansen express train to Sendai, Zao-Shiroishi, and more.
https://www.jreast.co.jp/e/eastpass_t/index.html

Tohoku Expressway Pass: Offers unlimited used of toll expressways in the Tohoku region for a flat fee. Available only in conjunction with car rental from a participating dealer (see link for list). Pass is programmed into the car's ETC card at time of rental.
English info: https://www.driveplaza.com/trip/drawari/tep2015/en.html

This website uses cookies to improve your experience while you navigate through the website. Out of these, the cookies that are categorized as necessary are stored on your browser as they are essential for the working of basic functionalities of the website. We also use third-party cookies that help us analyze and understand how you use this website. These cookies will be stored in your browser only with your consent. You also have the option to opt-out of these cookies. But opting out of some of these cookies may affect your browsing experience.
Necessary Always Enabled

Any cookies that may not be particularly necessary for the website to function and is used specifically to collect user personal data via analytics, ads, other embedded contents are termed as non-necessary cookies. It is mandatory to procure user consent prior to running these cookies on your website.